Our camp is well represented online and allows for comments and communications from many sources. Recently, an email was received showing preservation of our history and respect for our ancestors is far from being forsaken by the “younger” generation. Garrett McGillis, an Eagle Scout in Pontiac, Richland County SC, contact-ed Rick Little is advising that he was caring for an abandoned cemetery holding Confederate soldiers. He asked for help registering the graveyard so their final resting place was not forgotten. Subsequent emails between Rick and Garrett added more detail. The cemetery once belonged to a church that had burned down decades ago. It was not rebuilt, and the records were lost. The land was sold, and the new owner maintained the cemetery until his death several years ago. Garrett had talked with the owner numerous times previously and learned that several veterans were buried there, including several Confederates buried in an unmarked wartime mass grave. Additionally, a marked grave thought to be for a Con-federate soldier who survived the war.

However, since the owner’s death, upkeep had stopped. Garrett noticed the lack of maintenance as he passed the site daily, going to and from school. He took it upon himself to carry out a complete cleanup of the cemetery for his Eagle project. As he put it,
“I gathered a group of fellow Boy Scouts together, and we got to work. We removed dead and unwanted trees, cut the grass, fixed damaged tombstones, placed a park bench, and planted flags at all known veteran’s graves. Since I didn’t know the exact location of the unmarked soldiers, I placed one flag in the general area.” He provided Rick several before and after pictures showing the site was transformed from a wilderness area to a pristine condition. Garrett is now maintaining it by himself.
Rick was able to assist Garrett by providing the pertinent contact information on registering the cemetery. He also asked Mike Thomas to research the probable Confederate soldier buried there. That man, Pvt. Frederick Lovett, Co, C, 7th SC Infantry Bat-talion, was severely wounded in May 1864 and placed in the Invalid Corps in January 1865. Somehow, he was made prisoner by Sherman’s army as it passed through Columbia in February and sent to Hart’s Island POW facility in New York harbor until released in June 1865. Census records show Lovett returned home in Pontiac married and raised a family while farming. He died in 1909. Rick sent this research information to Garrett to share with his fellow Scouts. 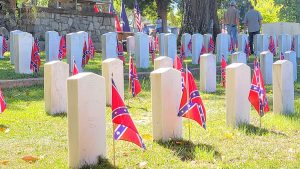 This is a classic instance of a young man recognizing a need, possessing a deep conviction to do right, and a willingness to step forward in the interest of honoring those who went before him and preserving their history. Undoubtedly, there are many other like-minded young men and ladies with those same attributes that we do not know. We must be willing and prepared to assist, encourage, and adequately appreciate them whenever opportunities like this arise.