It is the duty of the Sons of Confederate Veterans to defend the Confederate Soldier’s good name,
and to ensure that the true history of the South is presented to future generations 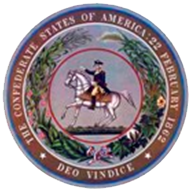 The Confederate Seal was the seal of the government, styled Confederate States of America, of the eleven states that attempted secession during the War for Southern Independence.

The seal features George Washington on horseback, in the same position as a statue of him in Richmond, Virginia. Washington is surrounded by a wreath, which is made of some of the main agricultural products of the Confederate States, including wheat, corn, tobacco, and cotton. The margin of the seal features the words “The Confederate States of America: 22 February 1862” and the national motto, DeoVindice (“Under God, Our Vindicator” or “With God as [our] Champion”). The date on the seal represents when Jefferson Davis was inaugurated after the first and only Confederate general election and is also Washington’s birthday.

But the men who followed it, and the world which watched its proud advance or defiant stand, see in it still the unstained banner of a true and generous people, whose deeds have outlived their country, and whose final defeat but added luster to their grandest victories.

It was not the flag of the Confederacy, but simply the banner-the battle flag-of the Confederate soldier. As such it should not share the condemnation which our ’cause’ received, or suffer from its downfall. The whole world can unite in a chorus of praise to the gallantry of the men who followed where this banner led.”

from a speech by General P.G.T. Beauregard, C.S.

The ‘Stainless Banner’ was adopted in 1863 by the provisional government of the Confederate State. The design change came because the 1st Nation was sometimes misidentified as the US Federal flag on the battlefield when it was hanging down a pole. This flag is sometimes referred to as the Stonewall Jackson Flag. This was the flag the draped General Jackson’s casket

The popular flag that was raised after the South Carolina Secession Convention voted to secede from the Union. The flag was used as inspiration in the designing of the Confederate battle flag.

At the First Battle of Manassas, Gen P.G.T. Beauregard noticed the confusion due to similarities between the First National Flag and the US Flag. His troops had also brought their colors. This enhanced the confusion.

Beauregard called on his aide William Porcher Miles to design a flag that would be used for guiding the troops into battle. Miles drew inspiration from the South Carolina Sovereignty flag in the design of the flag that would become synonymous with the Confederacy. The flag would be used in battle for the first time in December 1861.

The First Confederate Navy Jack consisted of a circle of seven 5-pointed white stars on a field of light blue.

The Second Confederate Naval Jack was an elongated version of the Confederate Battle Flag. The Naval Jack saw service by several Confederate Army units. Gen Braxton Bragg ordered the flag to be used by troops falling under his command within the Army of Tennessee.

The Bonnie Blue never gained recognition as a true secession flag. The flag gained prominence after Irish songwriter Harry Macarthy penned a song bearing the name. Macarthy wrote the song after seeing the same flag raised in Jackson, Mississippi following the state secession from the Union. The song, Bonny Blue Flag, became the second most patriotic song in the Confederacy. After the war, the flag was displayed outside houses to signify a safe house for traveling Confederate soldiers.

Following South Carolina’s secession from the union, discussions emerged on a flag to represent the new Republic. The Senate and House discussed many ideas. A joint committee agreed on the flag show. It was formally adopted on Jan 26, 1861.

Two days later, the flag was changed to make the palmetto tree white. No other flag change has been adopted since. in the 1900s, the historical commissioner for South Carolina changes the crescent to face in the direction that is synonymous with today’s South Carolina Flag.

Big Red – The official flag of the Citadel. Is this the original flag depicted? The document Big Red: A Timeless Symbol of Duty, Honor, and Courage wrote by Lt Col Andrew D. Kullberg, USAF (Retired) Member, Citadel Historical Council The class of 1983 brings some very interesting facts. A fund has been setup to try and bring the flag home. Download the article here: Big Red