Confederates On US Postage Stamps

Confederates On US Postage Stamps

The U.S. Postal Service has regularly issued War Between the States themed stamps since 1866 when the first Abraham Lincoln imaged stamp was distributed. Over the next 71 years, a number of other WBTS related stamps were issued honoring other northern individuals. In 1937, however, at the insistence of President Franklin D. Roosevelt, a stamp bearing the images of Robert E. Lee and Stonewall Jackson was issued simultaneously with another stamp bearing images of U.S. Grant, W.T. Sherman and Phillip Sheridan. The Lee-Jackson stamp caused a major uproar in the north but President Roosevelt didn’t back down. Instead, he made it clear that he saw the United States of America in 1937 as being one country and the stamp was a sign of inclusiveness.

Robert E. Lee has since appeared on four other stamps. He is shown with George Washington in a 1949 stamp commemorating Washington & Lee University. He also appeared in a 1970 stamp with Stonewall Jackson and Jefferson Davis marking Georgia’s Stone Mountain Confederate Memorial dedication. Additionally, Lee is alone on stamps issued in 1955 and 1995. His presence on five stamps is the most for any Confederate and surpasses the totals for most of the U.S. presidents. The top Union personalities are Abraham Lincoln (23 times), U.S. Grant (9) and W.T. Sherman (5).

In 1995, the U.S. Postal Service issued a wide variety of WBTS connected stamps and, for the first time, went deeper into the roster of Confederate personalities. Among those honored were Admiral Raphael Semmes and Generals Stand Watie and Joseph Johnston. Additionally, this stamp series included two famous and inspirational Ladies of the South, diarist Mary Chesnut and nurse Phoebe Pember. Surprisingly, Confederate President Jefferson Davis was featured by himself on a stamp signifying the first, and only, time he was favorably recognized by any part of the U.S. government.

In all, a total of eight Confederates have been subjects on a U.S. postage stamp. This contrasts with about thirty Northern personalities similarly honored. Other Union leaders featured are Generals Winfield Scott and Carl Schurz, and Admirals David Farragut and David Porter. Non-military northern figures from the WBTS on postage stamps are Clara Barton, Frederick Douglas and a whole host of other abolitionists.

Lincoln’s 23 appearance on stamps are a distant second to George Washington’s nearly 100. Strangely, Andrew Jackson was first pictured on a U.S. stamp in 1863 but by then he had already appeared on 2 Confederate stamps. George Washington was also featured by both sides. 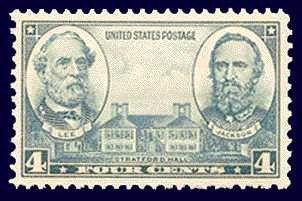