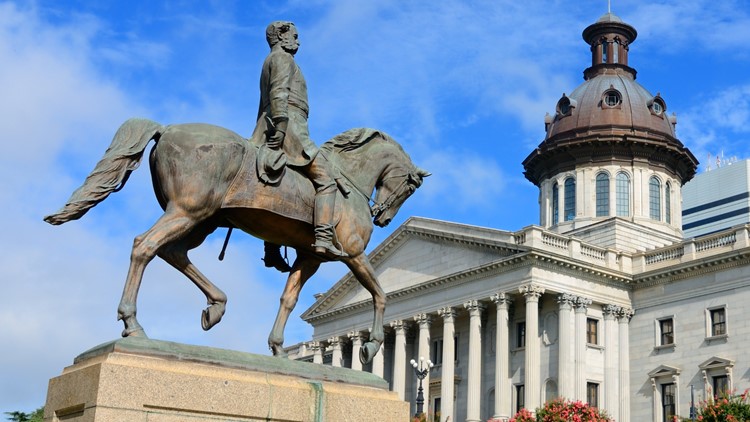 COLUMBIA, S.C. — Walking around the State House grounds in Columbia, visitors may encounter some of the 30-odd monuments placed there, some that were erected as a direct result of anti-segregationist movement that began at the end of the Civil War.

As Confederate-related statues are being taken down throughout the South – Charleston removed the John C. Calhoun statue from Marion Square Wednesday – we have a look at the history behind the monuments on the grounds of the state’s center of law making.

Historic Columbia, an organization dedicated to the preservation of and education about the history of Columbia, has done a great deal of work compiling the background stories on the monuments and statues on the State House grounds. Of the more than 30 monuments on view in that public area, we highlight 10 — and two named buildings — that have ties to either the Civil War or segregation.

Benjamin Ryan Tillman monument, installed May 1, 1940, has recently come in under scrutiny. Tillman, nicknamed “Pitchfork Ben,” was a devout segregationist. After a term as SC’s governor, Tillman was elected to the state Senate where, in 1895, a state constitutional convention was called to re-write South Carolina’s constitution. Tillman took this opportunity to lay the groundwork for Jim Crow laws that would eventually spread throughout the South. In order to cast a vote in an election in South Carolina, a person must own at least $300 worth of property, pass a literacy test, and pay a poll tax 6 months before elections. The new constitution also created segregated schools and banned interracial marriage. At the monument’s unveiling in 1940, then-US Senator James Byrnes praised Tillman’s “stout heart” and “the fight he waged for the masses of the people is an abiding inspiration to all true lovers of democracy.”

This Day In History

This Day In History 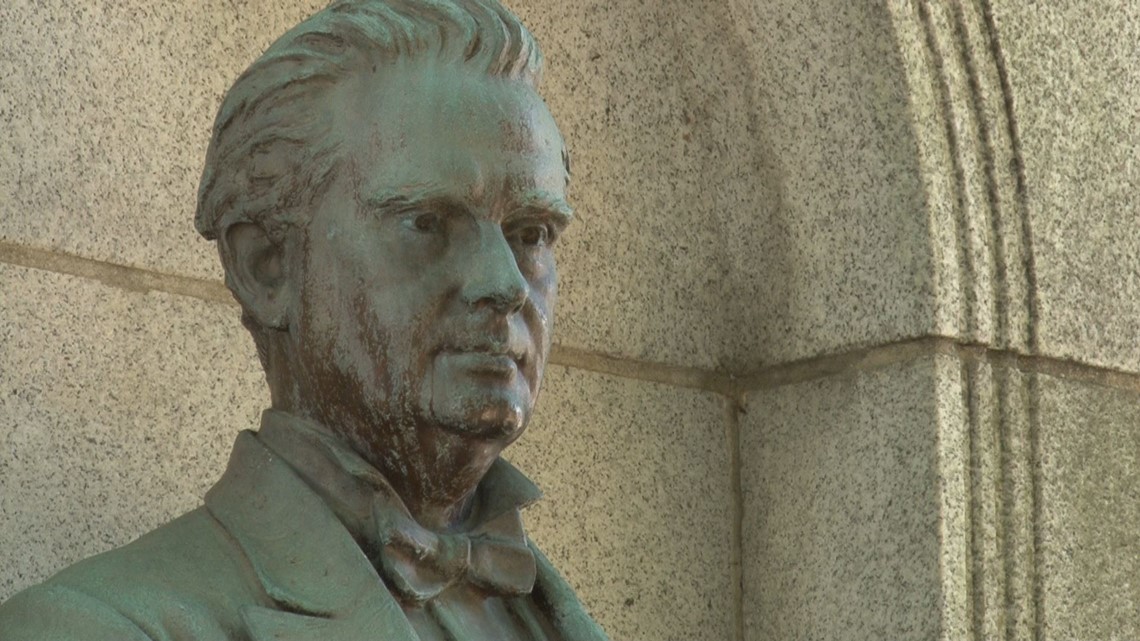 Monument to Dr. J. Marion Sims, originally installed May 10, 1929, moved to current location in 1969. Sims (January 25, 1813 – November 13, 1883) has been called the “father of modern gynecology” but that title glazes over the fact that many of his experimental surgeries were performed on African American women — without the use of anesthesia. The University of South Carolina recently decided to remove Sims’ name from a female dormitory.

Jefferson Davis Memorial Highway Marker monument installed November 1, 1923, moved to current location 1963. Davis (June 3, 1808 – December 6, 1889) is famously known as the President of the Confederate States of America from 1861-1865. Before that, he represented Mississippi in the US House and US Senate and was the US Secretary of War March 7, 1853 – March 4, 1857. The Jefferson Davis Memorial Highway is US Highway 1 in South Carolina. The marker was funded by the United Daughters of the Confederacy, a group described by Historic Columbia as one that “glorified the Confederacy, explained secession as a political act rather than a defense of slavery, and vilified the federal government’s empowerment of African Americans during Reconstruction.”

Robert E Lee Memorial Highway Marker monument, installed August 30, 1938, funded by the United Daughters of the Confederacy. The Robert E Lee Highway was originally a collection of state roads that lead from Greenville to Charleston. It was replaced by Interstate 26 after completion in 1969. According to Historic Columbia, the marker ” features the seal of the Confederate States of America and its depiction of George Washington, which the Confederacy had used to legitimize its claim as the second coming of the American Revolution.

Strom Thurmond Monument, erected December 4, 1999. Thurmond, December 5, 1902 – June 26, 2003, was a South Carolina senator and governor and US Senator. He served on the US Senate Armed Services Committee and Senate Judiciary Committee and was president pro tempore of the US Senate. He was also a devout segregationist in his early career and, after President Truman called for the end of racial discrimination in the US Army in 1948, Thurmond ran as a third-party candidate for president as a Dixiecrat (he carried four states and received 39 electoral votes). He also fathered Essie Mae Washington-Williams (born on October 12, 1925) by Carrie “Tunch” Butler (1909–1948). Butler was an African American maid who had worked for Thurmond’s parents and was 16 years old when Thurmond, 22, impregnated her. Although he supported her financially throughout his life, Thurmond did not publicly acknowledge Washington-Williams.

Wade Hampton III Monument erected November 20, 1906, by the United Daughters of the Confederacy and United Confederacy Veterans. Hampton was born in Charleston March 28, 1818, and died in Columbia on April 11, 1902. He as a member of the SC House and SC Senate before being elected governor in 1877 and then to US Senate in 1879. In the mid-1870s, Hampton joined the “Red Shirts,” an organization that grew out of the KKK and worked to suppress black voting in the state by violence and intimidation.

Profiles of Robert Young Hayne and George McDuffie monument erected around 1860. Both men served as South Carolina governors and US Senators before the Civil War and members of the South Carolina Nullification Convention in 1832. Both were avid supporters of states’ rights and strengthening the power of the slaveholder. Hayne lived November 10, 1791 – September 24, 1839; McDuffie, August 10, 1790 – March 11, 1851.

South Carolina Monument to the Confederate Dead, installed May 13, 1879. According to Historic Columbia, “Like many Lost Cause monuments erected by southern women in the decades immediately after the Civil War, it valorizes the sacrifices of soldiers fighting for a supposedly just cause. William Henry Trescot’s inscription asks viewers to ‘recognize that these were men whom power could not corrupt, whom death could not terrify, [and] whom defeat could not dishonor.’ ”  The Confederate flag was placed on a staff behind the monument after it was removed from the State House Dome in 2000 and flew there until it was taken down in 2015.

South Carolina Monument to the Women of the Confederacy, initially installed at the base of the State House southern steps in April 1912 and moved to current location in 1979. Funding for the monument was championed by the South Carolina General Assembly and William Elliott Gonzales, then the editor of The State newspaper. The monument focused less on the wartime activities of these women than on their roles as mothers.

John C Calhoun Building named after the man that served as a South Carolina representative in the US House, Secretary of War (1817-1825), Vice President of the United States under President John Quincy Adams (1825-1832), US Secretary of State (1844-1845),  and US Senate (1845-1850). While in Congress, he served alongside Daniel Webster and Henry Clay, but chose to support the theory of nullification (states’ rights), and defended white Southern beliefs and practices, including slavery. 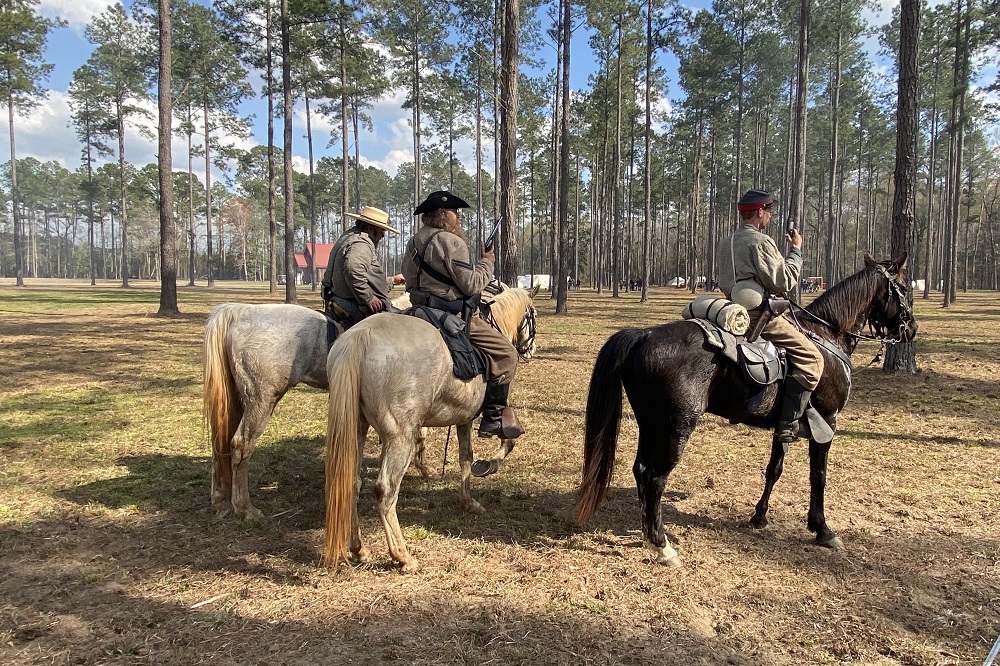