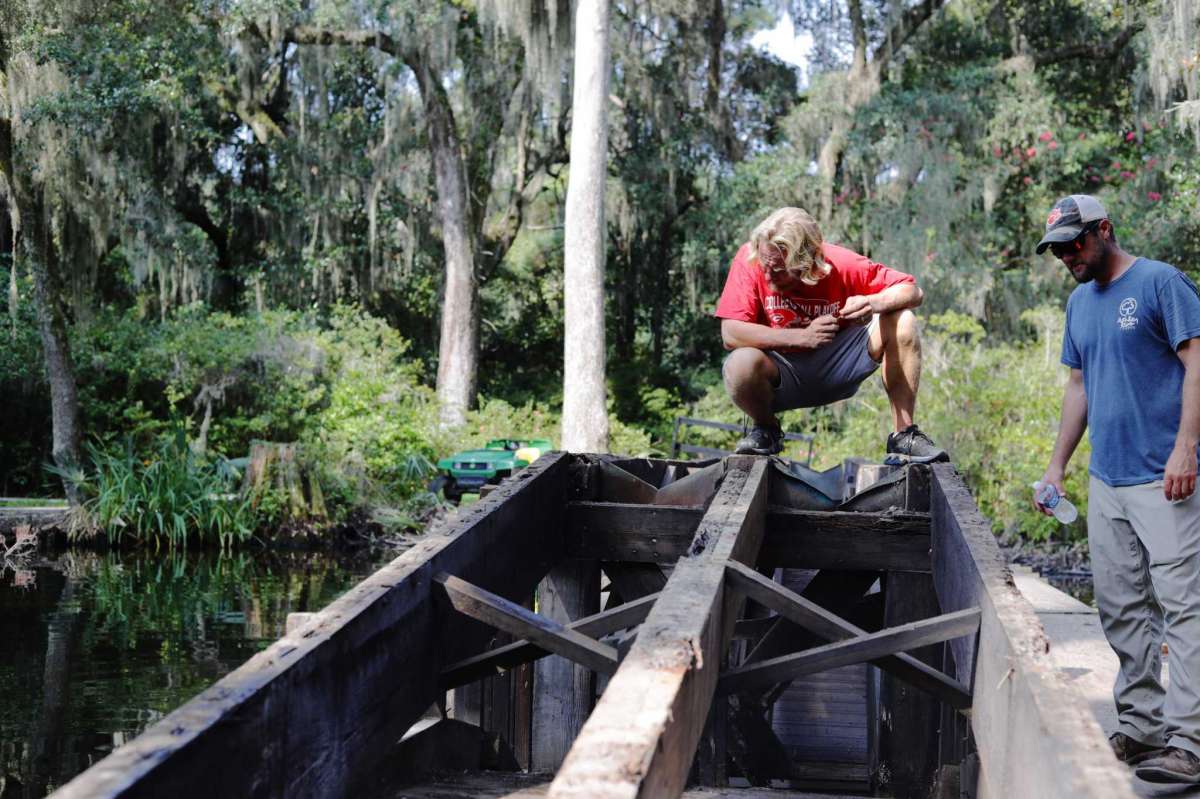 CHARLESTON, S.C. (AP) — On a rainy evening in early July, a toppled tree turned an already unusual summer at Magnolia Plantation and Gardens into a much more challenging one.

A week of heavy rain brought a large maple crashing down on the site’s historic Long White Bridge, taking out most of the railing, warping the deck and creating major structural cracks. After an assessment of the damage, it was clear a major rebuild was in order.

The tree fell about two months after Magnolia reopened following a coronavirus-prompted shutdown that was about as long.

At the time, Director Tom Johnson said it was a year “for the record books.”

Since then, the bridge has been stripped of all the painted white wood that gave it its name, exposing the arches and supporting beams below, like a negative of the souvenir photo so many travelers have snapped on visits to the gardens.

The bridge is one of the most iconic sites on the property — or the iconic site, to many — so the pressure is on to get the restoration right.

So far the process has involved pulling up and clearing away the damaged portions of the bridge, digging through the archives to study old images of the structure, and locating and transporting huge cypress beams recovered from the bottom of Lake Marion.

And that was the easy part.

The real challenge will be getting the cypress beams out in the middle of the pond and hoisted onto the bridge’s frame.

Most of the construction will have to be done by hand, often while wading through the alligator-inhabited pond.

Chuck McElhaney, who supervises maintenance work at Magnolia and will oversee the construction work on the bridge, said he isn’t worried about the gators. He is a little worried about the beams, which each weigh about 1,100 pounds.

Once they’re in place, though, McElhaney said he thinks workers will be well on their way to a bridge that will stand for “another 100 years — easy.”

The exact age of the Long White Bridge isn’t known, but it was probably built around 1841, said Magnolia historian Caroline Howell, meaning it’s almost certain the original was constructed by people who were enslaved.

No documents about its creation are available since pre-Civil War records about the property were lost when the house was burned in 1865, Howell said, but it is known that the property was a working rice plantation at the time, run with the labor of enslaved people.

Joseph McGill, who gives historic tours at Magnolia and is founder of the Slave Dwelling Project, said he thinks people should be confronted with the bridge’s origins in slavery — and the origins of many of the structures that visitors admire when they come to Charleston.

This rebuild could be an opportunity for that, he said.

“We’ve got to force that thought,” McGill said. “This beautiful thing you’re seeing, it came about because of stolen labor. … We have to incorporate that into the narrative.”

While documentation of the bridge’s original construction is not available, a deep well of photographs, postcards and other likenesses were kept over the decades since, leaving Magnolia a record to track how the structure has changed over its about 180 years.

The oldest dated photographs were taken in 1896 by John Olmsted of the Olmsted Brothers, a prominent landscape architecture firm around the turn of the last century.

Those particular images are “incredibly detailed and clear,” said Kirk Brown, an outreach coordinator for Magnolia who has been diligently documenting the rebuilding process. They’re dated and labeled, too, he said, with Magnolia’s name at the time, “Magnolia on the Ashley.”

It’s clear from studying those photos that, while at first glance, the bridge appears to have stayed the same, there are subtle differences. The arch appears to be lower now than it was in the Olmsted photographs, Brown said, possibly because the water level in the pond rose, the pilings sank or some combination of the two.

The bridge is no stranger to repairs: It’s likely undergone some kind of restoration or rebuilding work once every 30 years, Howell said.

When the current rebuild is complete, the bridge may look a little different from what modern visitors remember.

Winslow Hastie of the Historic Charleston Foundation, whose family has owned Magnolia since 1676, said they’re considering adding back some of the detailing on the bridge that’s visible in early photos but has disappeared over the decades.

The wood being used to rebuild the bridge should also bring it closer to its earlier state. Cypress was most likely the wood used during the original build in the 1800s.

Up until this week, acquiring the right wood for the project was the focus.

Andrew Branton of Ashley River Lumber and Nathan Tarpein of Congaree Champions — a firm that specializes in diving for old growth wood in South Carolina’s rivers and lakes — hauled their first load of what’s known as “sinker cypress” to Magnolia on Tuesday morning.

The logs themselves are a piece of history. They were cut more than 100 years ago at a mill owned by timber tycoon Francis Beidler, Tarpein said, and have been perfectly preserved underwater for decades.

“They look like they were just cut yesterday,” he said.

While the region’s waterways are chock full of cypress logs just waiting to be uncovered, this order was a tall one, Tarpein said. It’s not easy to find logs that can be made into a perfectly straight beam of the size they were looking for, about 32 feet long.

It was worth it though, Tarpein said, to be part of such a unique project. He’s volunteering his time to help with the actual construction.

The bulk of that work should start next week, and Magnolia is shooting for an unveiling date at the beginning of November.

As a nod to the people who are doing the work of this rebuild — and a way to document these strange mid-pandemic times — they will prepare a time capsule to be installed with the rebuilt bridge.